Art and Culture of Chhindwara

Chhindwara has been a huge melting pot of various beliefs and customs that constitute the rich culture of this place. There is predominance of tribal population in this peaceful land. Gond tribe constitutes of the major chunk of the tribals in this region. The people of this tribe are short and dark- complexioned. The principal sub-tribe of ‘Gonds’ are pardhan which inhabit the place in great numbers.

The Pardhans believe in black magic and worship the ‘Saj’ and believe their god ‘Bura Dev’ lives under this tree, so they never burn wood of this sacred tree. After mixing with other people, they have also started worshipping Hindu gods. Other tribe found in the city are Bharia and Korku.

Chhindwara is home to people of various religion other than tribes including Hindus, Muslims, Christians, and Buddhists etc, which makes it a cauldron of composite culture. In fact some of the famous temples and Mosques can be found here. Several language and dialects are spoken by the inhabitants of the city, Marathi and Hindi the chief among them. Majority of tribal speak Gondi and Hindi mixed with Marathi.

Festivals are the heart of people’s live in Chhindwara and is celebrated with enthusiasm and passion. Some of the most celebrated festivals of the region are Pola, Akhadi, Gotmar Mela and Bhujalia etc. Let’s look upon some which are unique to this region:

Bhujalia: The tribals of Chhindwara celebrate this festival with pomp and vigour and have been celebrating this festival for over 50 years. What makes this festival appealing is the fact that followers of all religions come forward to participate in this festival. Bhujalia is celebrated for three concluding days of the monsoon. The main highlights of this festival is the procession taken out featuring tribal art and culture. Artisans dress as warriors and they perform at the procession. People from other community greet them when they reach their areas. During this festival people offer green shoots of wheat to water in order to yield crops in abundance.

Gotmar Mela: Gotmar literally means ‘Pelting stones’ (‘Got’ means small stone, ‘Mar’ means to beat). The Gotmar fair is held in the headquarters of Pandhurna, ninety kilometres away from Chhindwara city. This Fair is unique to this place. The fair falls on the second day of the ‘Bhadrapad’ new moon day. This fair is celebrated on the banks of river ‘Jam’, every year a tree is erected on the river with flags attached to it and people from the both sides i.e. residents of ‘Pandhurna’ and ‘Savargaon’ participate in the fair. 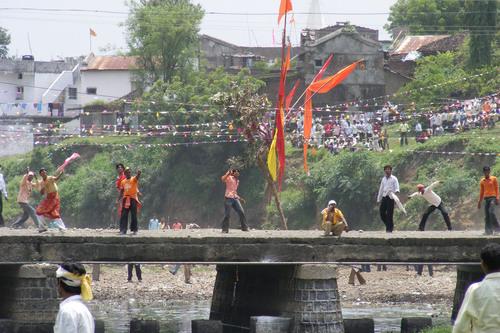 People from each village try to reach the tree and remove the flag, but are obstructed by the stones pelted at them. Whoever removes the flag before the other is considered victorious. Stones are pelted from both sides of the river resulting in serious injuries and sometimes death. Local authorities in the past have tried to replace stone with other objects but with no success. Gotmar Mela was banned in 2009 and 2011 but this practise still continues, elaborate arrangements are made for smooth functioning of this fair.

Apart from these festivals and fairs, Chhindwara has a very active dance culture. Many dance forms are practiced in the city. Some of the famous dance forms are Nagpanchmi dance, Seli dance and Gedi dance. The rich culture of Chhindwara makes it a destination to explore.